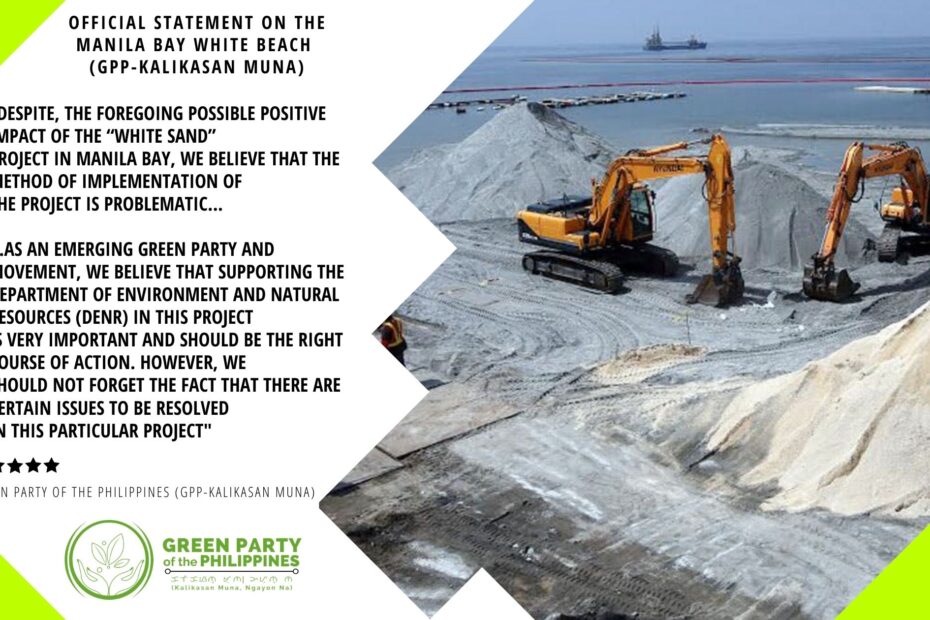 We, the Green Party of the Philippines, is an emerging environmental party in the Philippines and at present has nationwide membership covering 16 regions, 31 provinces, and 163 cities and municipalities. We have active chapters at the “local” government administrative units, at city and municipal levels.

BACKGROUND OF THE PROJECT

The “Manila Bay Rehabilitation” was launched on January 26, 2017, by DENR Secretary Roy Cimatu. It is a project which was the result of a Supreme Court decision dated December 18, 2008. The Supreme Court decision above was the result of a petition by a determined group of private individuals calling themselves the “Concerned Residents of Manila Bay”. The group included Atty. Jaime Agustin Oposa, who is the son of the legendary environmental activist Atty. Antonio Oposa, a Ramon Magsaysay awardee. (1)

On January 29, 1999, the Concerned Residents of Manila Bay filed a civil suit at the Regional Trial Court of Imus, Cavite, to force government agencies to clean up Manila Bay, as they were mandated to, by their own policy. In response, the government sued them, and lost; the process took almost 10 years. In 2008, the Supreme Court ruled that the government had to do it. It took another 10 years before the project was actually implemented.
Note, however that this nowhere in this order was it mentioned the specifics of the project especially one involving dolomite or white sanding the Manila Bay Area.

HEALTH CONCERNS ON THE PROJECT

The Department of Health (DOH) already cleared the issue on the health hazards of the project. According to a statement on September 9, 2020 DOH said it learned from the Department of Environment and Natural Resources (DENR) that the “white sand” it would be used to beautify Manila Bay is a type of dolomite that is two to five millimeters or 100 times bigger than dust. (2)

DOH also said that “occupational health and safety standards for workers and precautionary measures for the containment of possible dust formation” are likewise being enforced in the implementation of the multi-million-peso project, citing information it got from DENR.

“Therefore, in terms of the general safety of the public who will be enjoying the shoreline once permitted, DOH assures that no untoward incidents will occur as a result of this endeavor,” DOH added.

THE EFFECTS OF WHITE SAND ON MANILA BAY REHABILITATION

Although it can be considered that this is not the ultimate solution to the problem in Manila Bay, we believe that in part it can contribute to the beautification of the area and become an added deterrent in the throwing of waste in Manila Bay.

As long as, the DENR assures that the white sand made of dolomite will remain intact despite possible erosion due to strong currents especially during typhoon, then we believe that it is environmentally sound.

THE PROBLEM OF THE “WHITE SAND” MANILA BAY REHABILITATION

Despite, the foregoing possible positive impact of the “White Sand” Project in Manila Bay, we believe that the method of implementation of the project is problematic as follows:

OUR CALL AND RESOLUTION

As an emerging green party and movement, we believe that supporting the Department of Environment and Natural Resources (DENR) in this project is very important and should be the right course of action. However, we should not forget the fact that there are certain issues to be resolved in this particular project.

We hereby make the following stand and call:

Endorsed by the National Council of the Green Party of the Philippines (GPP-KALIKASAN MUNA) on September 12, 2020.