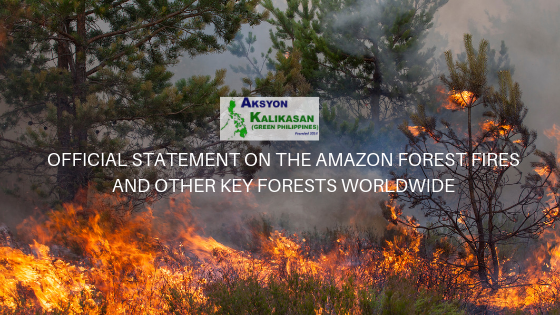 “Our Home, Our House is Burning.”

We are experiencing an International Crisis of epic and catastrophic proportion. More than a million acres of rain forest had already been burned in more than 70,000 forest fires across the Amazon in South America.

The Amazon forest produces about 20% of the world’s oxygen, and is often called “the planet’s lungs.” If this destruction continues then it could start emitting carbon instead which could complicate the current climate situation of the planet.

It is worth mentioning as well that besides the Amazon, several other major fires are happening to key forests across the globe which includes Siberia, the African continent and Indonesia among others.

We, Green Philippines (Aksyon Kalikasan) stand united with the people of Brazil, South America, Siberia, Africa, Indonesia and the world in calling for an immediate action to stop the further spread of these fires.

We condemn the inaction of Brazil’s president, Jair Bolsonaro. His lack of action and of encouraging logging and farming in the Amazon is putting not only the Amazon at risk but the entire planet.

We, as a united green movement and organizing the green party in the Philippines to wit:

We are also encouraging everyone to support and sign the petition at https://secure.avaaz.org/campaign/en/amazon_apocalypse_loc/?caeghgb and other related petitions.

On our end, we will continue to do our own effort of protecting the environment by initiating projects that will both protect existing forest covers in the Philippines and if possible increase them atleast 50 percent forest cover in all the major islands.

Together our voices are strong. Together we can help.

Sign the PETITION CALLING FOR A DECLARATION OF CLIMATE EMERGENCY.