MALICIOUS POST OF MAINSTREAM MEDIA ABOUT FISH KILL IN MANILA BAY LINKING IT DIRECTLY TO DOLOMITE SAND DUMPING IS A VIOLATION OF RA 10951. 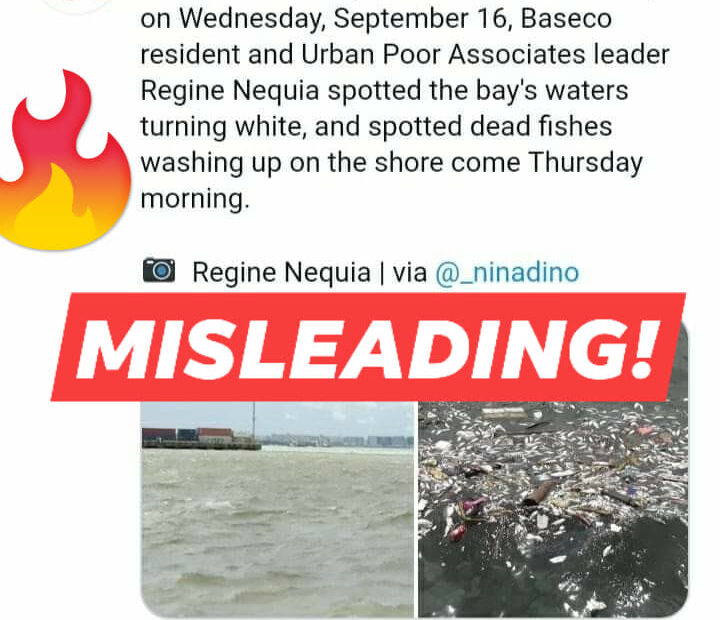 Last time, I just brush off the news from mainstream media about piles of rubbish in Manila Bay from the the part of the beach near Manila Yacht Club since it is expected to occur heavily cleaning up the other side so it all natural to see other garbage floating to be found elsewhere within the coastal areas. Yesterday, I was totally puzzled by claims of dead fish in Baseco compound area. Just like how mainstream media fooled their own followers.

This time I can not rest until we found out about who is the culprit of this sabotage. Now, this is not the first time that a natural phenomenon such as fish kill occured in different parts of the Philippine waters, neither salt or fresh water, some tilapia species such as Blackchin Tilapia ( Sarotherodon melanotheron) or Mayan Cichlid (Cichlasoma urophthalmus) which has been in Manila Bay in the 1800’s can survive a wide range of salinity, it can even persist in brackish water due to its physiological adaptation to the changes in salt content of the water, but a sudden change that is so quick can kill them almost instantly. We have seen the same sight before last February, 2020 despite of the effort being done to clean up and clear up piles of garbage that accumulated over the years, the same thing also happen in Laguna Bay, which is a fresh water lake just after lockdown three months ago some 275,000 kilograms of tilapia and carp were lost because of this event, this has been a reoccurring event since dead fishes are found in Manila Bay on several seasons.

Massive death of fishes is very unlikely to be due to dolomite sand, since its mineral effect is for water filtration, Which obviously help to clean of the dirty water in Manila Bay. Also climate change such as temperature rise and pH lowering occurs in gradual changes, meaning slow in effect, and organisms can adapt to these alterations at some point, fishes might get stressed out but it doesn’t mean that they will die suddenly.

Possible Causes of the Fish Kill

As one of the presenters of some undergraduate research during 10th Zonal Research and Development Review at Ateneo De Manila University in 2006, I have seen International experts address issues pertaining to massive fish kills and I learned a lot from them. They stated that temperature increase and availability of CO2 in water can lead to harmful algal blooms or HABs which can create eutrophication and fish kill. There are many possible reasons since there are residents and establishments near the area, and these are

With all these reasons presented, we can conclude that it is not dolomite sand that directly causes the fish kill.

Another hypothesis that I am looking at is the onslaught of tropical storm Leon. A weather disturbance such as a tropical storm can destroy coral reefs, stir the water column, scatter bottom sediments, and increase pollution via storm-water runoff which can lead to poor dissolved oxygen in water causing those fishes to die.

It is an insult for a former Environmental Science Professor like me to accept the hearsay (sabi-sabi) of SOME GULLIBLE AND UNPROFESSIONAL MAINSTREAM MEDIA to spread news that malign the facts of the root cause behind scientific phenomena. A short cut that they did is to base it from personal accounts of people who are not even a scientist at all. I condemn their actions of creating public scandal under RA 10951 that President Duterte signed into law on Aug. 29 to amend the penal code, the crime of publishing “false news” has been incorporated into the sections on libel, these media companies must be held liable.

Let us end the malicious news of some mainstream media! Calling on the government offices to persecute these rascals!

Disclaimer: This blog post is the opinion of the writer and does not constitute an official stand of the Green Party of the Philippines (GPP-KALIKASAN MUNA) on the particular topic or issue.