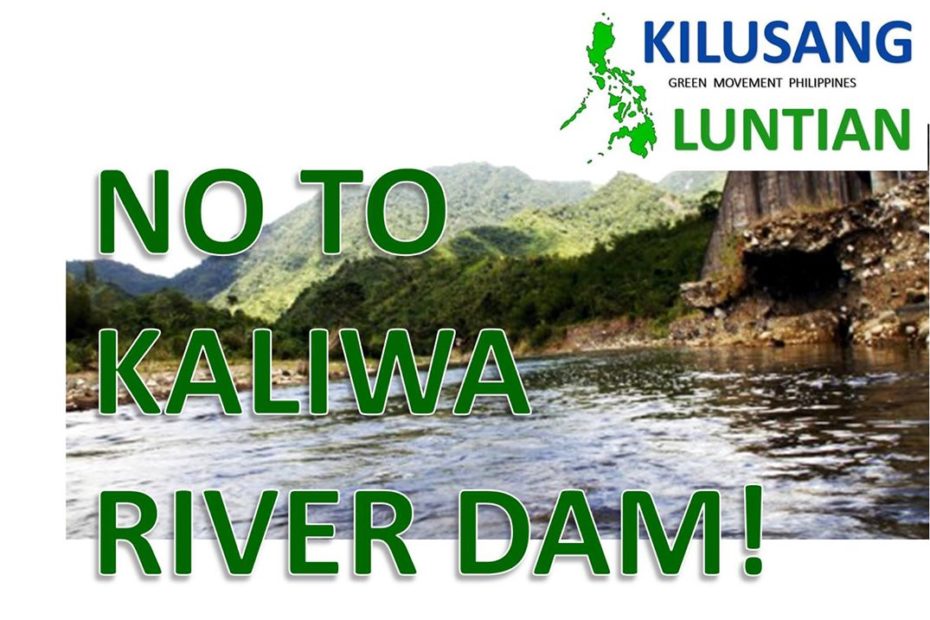 Kilusang Luntian, a national green political movement in 9 regions; including Central Luzon, National Capital Region and CALBARZON who are direct stakeholders of this issue declares its support to the people of Infanta, Quezon and the Dumagat-Remontado Tribes in their opposition to the proposed 60-meter Kaliwa river dam.

This project aims to create an embankment to store water to be diverted to Tanay and Antipolo water treatments for processing by private water concessionaire Maynilad supposedly to ensure sustainable source of freshwater to Metro Manila and surrounding provinces. It is part of the National Centennial Water Source (NCWS) Project.

The Local Government of Infanta, Quezon contends that the endorsement of the Governor of Quezon is not enough. The Infanta LGU have consistently passed resolutions not granting their endorsement on the grounds that it will affect the irrigation system that currently sustainably supports their rice irrigation system. They also cited the impact of this dam to inundate about 291 hactares of the Infanta Kaliwa watershed that can contribute in drying up the aquifers supplying ground-water source for the Infanta Quezon Water District.

This is the reason why the project has yet to secure an Environmental Clearance Certificate (ECC) from the Department of Environment and Natural Resources (DENR) as required by R.A. 7586 Since the proposed Kaliwa Dam is within the ancestral domain and will also inundate the sacred site of the Dumagat-Remontado Indigenous People in Quezon, no free, prior, informed consent (FPIC) has been given by the tribe. FPIC is a requirement for approval of any development project within and affecting Indigenous Peoples in their ancestral domain according to the Indigenous Peoples Rights Act (IPRA) or RA 8173.

Furthermore, in earlier petitions and cases filed against Maynilad and MWSS, the Water for All Refund Movement (WARM) contends this project is now grossly overpriced at 100B Pesos from its original assessment of only 45M Pesos. WARM further noted that the NCWS is supposed to be funded by advance collection of Maynilad from consumers but has since been transferred solely to government to pay the cost through largely a loan from China with no proper accounting of what happened to the 6 Billion Pesos (plus 3-5Billion pesos interest) collected earlier for this purpose.

Kilusang Luntian contends it is paramount that under the principle of subsidiarity, that the will of stakeholders closest to the issue and those most affected; in this case local communities represented by their LGUs and Indigenous Peoples who have effective ownership of these domains, MUST be made first above anything else.

Kilusang Luntian also argues that rehabilitation of existing watersheds within and surrounding Metro Manila and existing dams and other embankments and NOT a new dam is the solution to sustainable freshwater supply in this part of the country.

our solidarity for the people of Infanta and the in opposing this project, Kilusang Luntian Quezon Convenor all Green to petition NEDA and President Duterte to stop the Kaliwa Dam project and respect the decision of the people of Infanta and the Dumagat-Remontados. Kilusang Luntian commits to join any and all against the Kaliwa Dam.