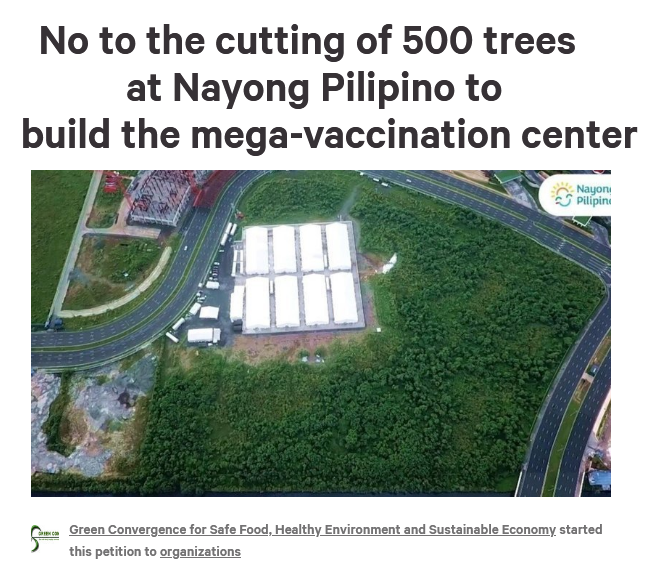 There should be no compromise between health and nature. It is by this compromise with nature that brought about this pandemic, so why should we be basing our choice between health and nature. Vaccination should be brought closer to the people. Nayong Pilipino and the 500 trees there should remain as is and continue to be part of the lungs of Metro Manila. In line with this GPP Kalikasan Muna (Green Party of the Philippines) supports the call and position of Green Convergence for Safe Food, Healthy Environment and Sustainable Economy, to wit, “No to the cutting of 500 trees at Nayong Pilipino to build the mega-vaccination center.”

GPP Kalikasan Muna (Green Party of the Philippines) invites everyone to also support the statement below and sign the petition in this link, https://bit.ly/save-nayong-pilipino.

We are with the Nayong Pilipino Foundation (NPF) and all conscientious citizens in opposing the construction of the vaccination center that is proposed to be built in the NPF premises. Many arguments have been raised against these projects and they by themselves should suffice to stop this project altogether: that it is an unnecessary expense because there are more than enough huge venues in Metro Manila cities for the purpose, that to transport people from their barangays to a central place would be a logistical nightmare and will expose them and more people all around to infection, that ceding the control of government land to a private entity is illegal, that the luxuriant mini-forest mitigate pollution and that are lungs of the metropolis, among others.

We would like to emphasize the climate change perspective which should at this time in human history take priority in all our decisions. We have been experiencing the climate calamities that have battered our country, with their consequent economic and social devastation. It is now well known among educated people that this worsening cycle of ferocious typhoons and disastrous droughts is due to the enormous amounts of carbon dioxide and other greenhouse gases that we spew into the atmosphere and are not removed adequately by our diminishing vegetation. Scientists have warned that should the Earth’s temperature increase more than 1.5 degrees centigrade, the disasters will be much, much worse and will ultimately destroy civilization as we know it.

Thus, we must look at our programs, national, local and personal, and make sure we minimize our carbon emissions and maximize our drawdowns. it is not an exaggeration to say that every carbon atom emitted and every leaf that absorbs it count. The 500 hundred trees and the biodiversity that support them count immeasurably. So do the gallons of fuel that will be burned to transport people from far and wide to the vaccination center. So does the construction of that superfluous venue as tons of minerals and metals will be mined, processed and transported. An environmental impact assessment, if the government makes one, as it should make one, will clearly show that the negative effects will surely outweigh the benefits.