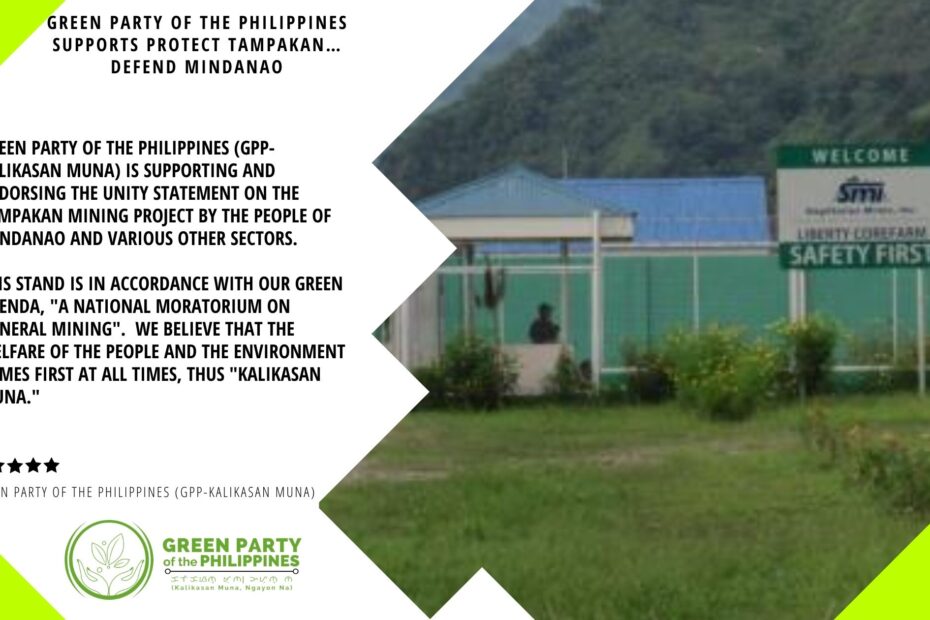 Green Party of the Philippines (GPP-KALIKASAN MUNA) is supporting and endorsing the Unity Statement on the Tampakan Mining Project by the people of Mindanao and various other sectors.

This stand is in accordance with our GREEN AGENDA, “A national moratorium on mineral mining”. We believe that the welfare of the people and the environment comes first at all times, thus “Kalikasan Muna.”

(Original Statement can be viewed and downloaded here)

We are one with the peoples of Mindanao and as the Filipino people, united in faith that calls for ecological justice and integrity.

We vigorously oppose, vehemently denounce and verily object to this Tampakan Mining Project of the Sagittarius Mines Inc. (SMI), whose key player is the Alcantara Group of Companies.

KNOW THE FACTS:   The Tampakan Mining Project is a mammoth project and leviathan in its impact.   SMI Tampakan covers 4 provincial boundaries[1] , the headwaters of six (6) catchments and 2 major river systems, where:

SMI Tampakan will leave irreversible impacts on food security, peoples and biodiversity, and is a serious threat to peace and security including Mindanao’s resilience to climate change.

Mindanao is being primed as the food basket of the country with 1/3 of its land devoted to agriculture, even as it ranks high in poverty incidence and heightened conflict areas.  It is also home to the critically endangered Philippine Eagle as well as rich flora and fauna species with high endemicity.[4] Globally threatened species are also found in Mindanao.

Protecting Tampakan is defending Mindanao and its key role in the Philippine economy and environment and the rest of the world.

LEARN FROM THE PAST

We do not want another Marcopper disaster: dead rivers, a heavily silted and toxic Calancan Bay, heavy metals flowing in the bloodstream of children, tailings-laced ricefields, from nearly 25 years ago until today.

In 2016, SMI’s permit was cancelled by then Secretary Gina Lopez of the Department of Environment and Natural Resources (DENR).  She had said that the environmental compliance certificate (ECC) should not have been issued at all due to serious irregularities.

In 2019, the Office of the President restored this ECC. How can a cancelled ECC be “restored”? And have the issues surrounding the illegitimate issuance of the ECC been resolved?

In 2020, we learned that the contract of the Tampakan Mining Project was extended for 12 years. The Financial and Technical Assistance Agreement/FTAA expired last March 2020. Apparently, in 2016, the previous administration’s Mines and Geosciences Bureau Director of the DENR Leon L. Jasareno, “approved” the 12 year extension.

But isn’t this being done behind the back of President Rodrigo Duterte who has declared repeatedly that the protection of the Filipino people and the environment is NON-NEGOTIABLE in his term?

Or did President Rodrigo Duterte himself consent to this 12-year extension by his silence? Did he actually consent to a project that endangers the whole of Mindanao, its old-growth forests, its rivers, its flourishing rice fields, the rights of the B’laans and the livelihood of 200,000 farmers in the interests of foreigners, or worse, in the private interest of political allies in business with foreigners? If not, as we suspect, are there not odious signs of malpractice in government in the resurgence of the Tampakan mines?

This October, Indigenous Peoples’ Month, the public learned that tribal rights were “granted” to the SMI Tampakan by the National Commission on Indigenous Peoples (NCIP) (NCIP) in a CP (Certification Precondition) issued last September 19. NCIP is charged to protect the rights of the indigenous peoples. News of this NCIP move came after the Koronadal City Regional Trial Court upheld the constitutionality of the open-pit mining ban of South Cotabato last October 12.

How can the actions of government be justified and reconciled?

The silence of DENR Secretary Roy Cimatu is deafening with consent.

The silence of President Rodrigo Duterte fails to protect his Mindanao and its peoples.

Silence means YES.  Yes to the destruction fomenting in the horizon:

Adverse impacts will be felt not only in Tampakan and the entire island of Mindanao – potentially for 2000 years. As Mindanao is the food basket of the country, a national food crisis in the middle of a pandemic looms.

Economic recovery stimuli to cope with the pandemic cannot be an excuse for mining. We cannot afford to compromise the environment especially in a pandemic brought about precisely by the exploitation of nature and biodiversity.

With our youth and young leaders we watch closely especially as the elections draw near – for signs of genuine and sincere leadership in environmental governance.

We are One for Mindanao and one as a Filipino people. We listen to the cry of the Earth and the cry of the poor especially in Mindanao: Oya Mindanao.

We share our voices with our sisters and brothers, our mothers/fathers and children in Mindanao.

[1] The final mining area (FMA) covers 9,605 hectares of land covering 4 different municipalities in Davao Del Sur (Kiblawan), Sultan Kudarat (Columbio), Sarangani (Malungon) and South Cotabato (Tampakan). This EXCLUDES the OLI (Offlease infrastructure) area and the Resettlement Area. The OLI includes a slurry pipeline and transmission lines that will traverse the provinces of South Cotabato and Sarangani. The proposed site of the filter plant and power station is at the coast of Sarangani Bay. Potential resettlements sites will affect nine (9) barangays within the areas of the ancestral domain. Research Brief: Mining and Water Governance prepared by the Ateneo Tropics and Ateneo Institute of Anthropology. August 2013. (unpublished research and joint review of the EIA process and results for the Tampakan Mining Project).

[3] From the presentation of Bishop Allan Casicas at the SoMEDay in Tampakan: Stakeholders’ Forum on the State of Mining and the Environment in Tampakan held last 30 October 2020 via zoom. https://www.facebook.com/ateneo.dedavao/videos/683665009191672

[4] Of the 812 flora species, 247 are Philippine endemics and 52 are Mindanao endemics and 55 species are threatened. Mindanao is called the bull’s eye of biodiversity because 95% of amphibians and reptiles in the region can only be found in Mindanao. https://www.sciencedaily.com/releases/2016/10/161017150914.htm Also, 437 of 600 birds found in the Philippines are found in Mindanao, of which 32 are endemics and 38 are globally threatened species. https://avibase.bsc-eoc.org/

[5] This equivalent to the 3 day bulk water supply for most (70%)  of Davao city from the Tamugan Bulk Water Supply Project.

[6] “Severe water shortage is projected to be experience in 2040, where agriculture is the most stressed sector and Mindanao, the most stressed region.” National Drought Plan for the Philippines (2019). Pp. 30-31  https://knowledge.unccd.int/sites/default/files/country_profile_documents/1%2520FINAL_NDP_Philippines.pdf