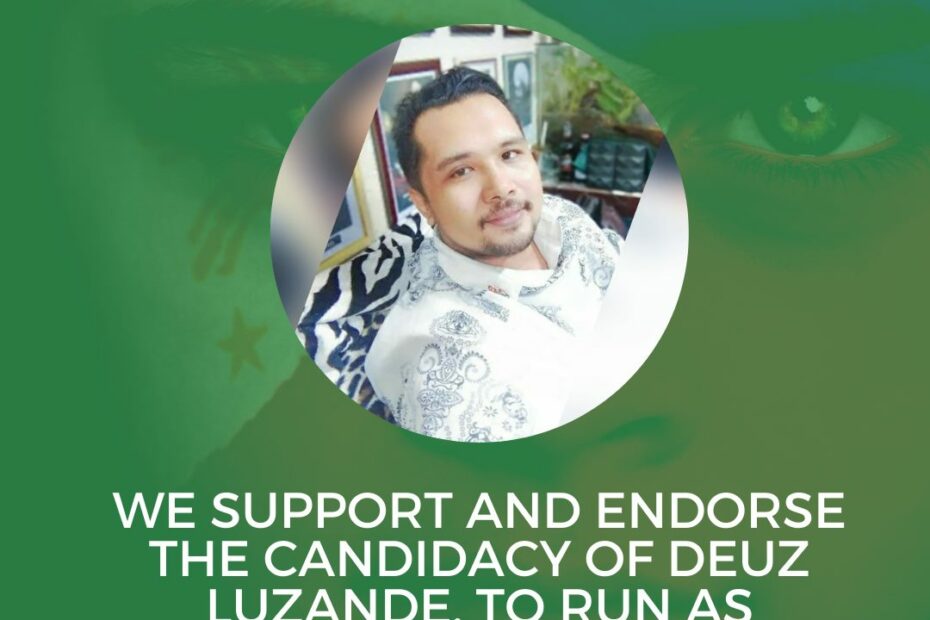 We would like to announce the candidacy of DEUZ LUZANDE, National Council Member and Auditor of GPP Kalikasan Muna – Green Party of the Philippines for MUNICIPAL COUNCILOR OF LILIW, LAGUNA.

His dedication to the people and service to the environment is unmatched. As a teacher, he won various competitions as a coach and trainer in both private and private schools.+

As a leader, he received the award of Outstanding volunteer at Dover Park Hospice in Singapore and The Enrichment Excellence Award from Ascend International Singapore

As part of environmental advocacy, he won the ACLADEB Asia Global Heroes Award as Environmental Protector 2021.

A former OFW from Singapore who worked as a Foreign Science Teacher in 2008, then later promoted as Head of Science Department the following year. At the same time he became part of The Philippine Embassy in Singapore as an Honorary Member of The Philippine Overseas Labor Office and established the very first Skills Upgrading Program offered for the abused and distressed household helpers at the Filipino Workers Resource Center, he was then project Supervisor and Instructor.+

He was a volunteer at Dover Park Hospice, caring for the terminally ill and dying cancer and HIV/Aids patients. He also offered his time for free, caring for and befriending elderlies at Orange Valley Nursing Home.

After the administration of former President Gloria Macapagal Arroyo, he returned back to the Philippines and tried the business industry for a while before becoming a College Instructor at Philippine Women’s University and a part-timer at Southbay Montessori School in Sta. Cruz Laguna. Then in 2014, he joined Laguna State Polytechnic University as a College Environmental Science Professor but also teaches Physical and Natural Sciences for College of Engineering, College of Arts and Sciences, College of Nursing and Allied Health, and College of Computer Studies. Former STEM Teacher of DepEd Laguna. He is also an educator of St. Bernadette College of Alabang.

A recipient of Asia Global Heroes Award as Environmental Protector 2021 by Asian+ Council of Leaders, Administrators, Deans and Educators in Business or ACLADEB was organized by Dr. Dionisio G. Magpantay in the light of the ASEAN Integration.

2nd Nominee of GPP Kalikasan Muna, Ngayon Na! Green Party of the Philippines! an emerging party list that cares for the welfare of the environment.

A loving husband to his wife Rhea and a caring father to his 2nd born child and daughter Tatiana, and his late son Voltaire.