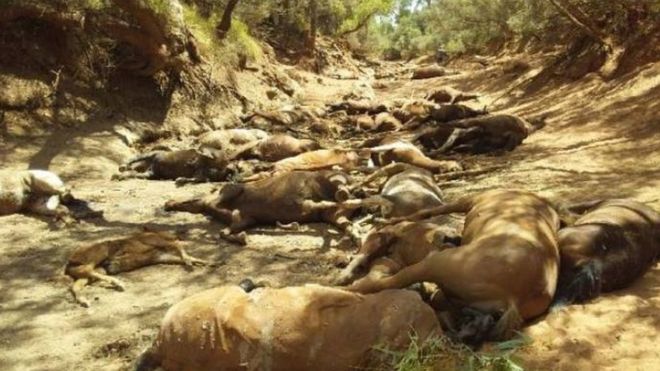 As the climate changes the effects on wildlife both plants and animals will be catastrophic. We need to act as a country and be an example to other countries that we can become a GREEN NATION now!

An extreme heatwave in Australia has led to the deaths of more than 90 wild horses in the outback, authorities say.

Rangers found dead and dying animals in a dried-up waterhole near Alice Springs, in the Northern Territory, last week.

About 40 of the animals had already died from dehydration and starvation. Surviving horses were later culled.

It comes amid record-breaking heat, with temperatures hitting 49.5C north of Adelaide in South Australia.

The mercury rose to 47.7C in the city itself on Thursday, breaking a record set in 1939.