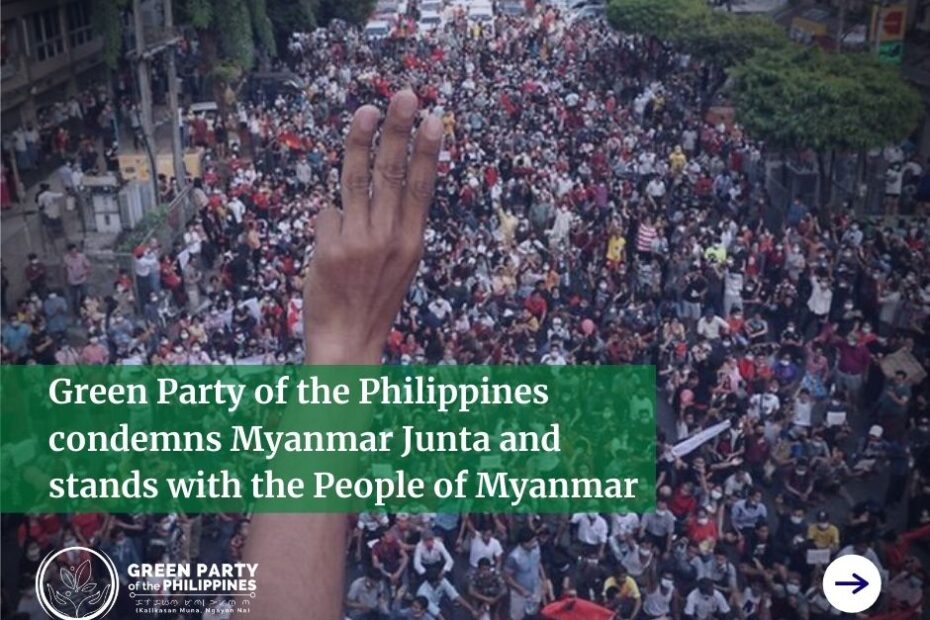 GPP Kalikasan Muna (Green Party of the Philippines) stands with our fellow green parties across the Asia-Pacific region through the Asia Pacific Greens Federation (APGF) in condemning the Myanmar Junta and supporting the people of Myanmar.

No government has the right to massacre and kill its own citizens for the reason of protesting something they believe is wrong. Peaceful protests and airing of grievances is a way to know the voice of the people.

The voice of the people is the voice of God. A duly elected democratic government by a landslide vote of the people of Myanmar was ousted through a coup d’etat in February 1, 2021. This is an unacceptable grab of power from a duly constituted authority, and worst killing protesters in the process.

The violent overthrow of a democratically-elected government and slaughter of peaceful protesters is abhorrent. Perpetrators must be held to account.

We stand in solidarity with the people of Myanmar. We grieve the loss of each of the hundreds of peaceful protesters and innocent supporters of democracy brutally killed by the Myanmar military forces – the Tatmadaw. Your loss is the theft of humanity by Min Aung Hlaing and his cabal of traitors to peace and human rights.

Return Power to the People

By their actions, the Tatmadaw and its leaders have forfeited any claim to authority, or humanity. The murder of at least six children on Saturday, among the 114 people whose deaths demand justice, is a travesty that demands action. Its perpetrators must be prosecuted, in accordance with international law. Its acts are indefensible.

Words are not enough. To the countries that have condemned the Tatmadaw – we support your condemnation. But words are not enough. We call on you to take action. We call on you to sanction those responsible, prosecute them, use your global influence to support the Spring Revolution, and help the people of Myanmar reclaim their democracy and civilian leadership. Cancel military sales to Myanmar. Prevent your military-industrial and other business sectors profiteering from Myanma blood. Take action.

To the governments that sent representatives to attend Saturday’s military parades, your decision was dishonorable and disgraceful. You are on the wrong side of history. There is still time to redeem yourselves – join all peace-loving nations and condemn the mass murder of peaceful protesters in Myanmar. Withdraw all support for the illegitimate military junta terrorizing the Myanmar people.

The brazen coup d’etat overthrowing Myanmar’s democratically elected government cannot be ignored. The Tatmadaw’s killing of hundreds of peaceful protesters, and imprisonment of more than 3,200, is an affront to humanity and justice. APGF condemns the illegitimate military junta, and by our Principles and Charter, we stand in solidarity with the Spring Revolution in its vision for justice and democracy in Myanmar.